How time flies in the World of brewing! Mart and I have just finished brewing our 7th all grain batch of beer (see the full list on Untappd) and this time we decided to go all out and begin brewing a Black IPA. If you are new to beer and brewing, a black IPA probably sounds wrong and many posts and articles on the internet will tell you it is wrong! But the idea is that you produce an overly hopped pale ale – but make it black without it becoming just a hoppy stout with the roasty flavours that are imparted from adding black/roasted grain into the mash.

I started my usual ‘research’ of the recipe by carefully sampling commercial Black IPA’s. My favourites being Black Rocks by Buxton Brewery, Black Betty by Beavertown, Fade To Black by Weird Beard Brew Co and Wild Raven by Thornbridge Brewery. It’s interesting to see each interpretation and also decide myself on how much roast (if any) I wanted to come through. Then I turned to the BeerSmith iPad app to start adding ingredients and see how they effected the colour rating (EBC) and ABV. Once I had a basic outline I turned to twitter for reassurance …

What happened next was a fair amount of twitter discussion and an email conversation with freelance Black IPA advocate @kempicus (formerly from two of my favourite local Black IPA breweries – Thornbridge and Buxton!) The recipe was tweaked and the dry hops doubled! This was turning out to be our most expensive recipe yet (80p per pint).

With the recipe sorted it was time to turn to making sure all the equipment was in order and time to drill a larger (21mm) hole through stainless steel to fit the new bazooka screen and lever tap as we’ve had so many problems with the hops clogging up the existing tap on the boiler. Thanks to my neighbour @Bodgematic for helping me with this. 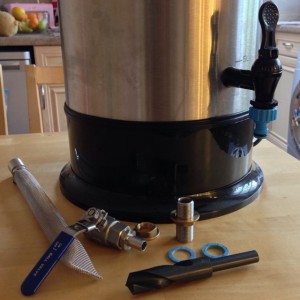 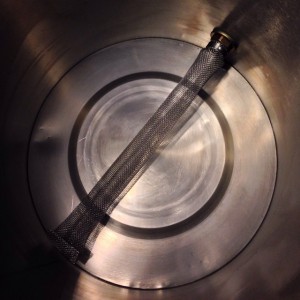 The Turbo 500 boiler/HLT was filled with 25 litres of tap water and fired up (plugged in) – we had no time to let the water stand to dissipate the chlorine and we didn’t add any water additives to Burtonise our water. We figure our water is already from the River  Trent and we live close enough to Burton on Trent anyway 😉

We added 1 full domestic kettle of boiling water to the insulated Mash Tun and shut the lid to allow the internals to heat up. All the ingredients were weighed out and put in containers (you know, the Indian takeaway type) and once the HLT reached 72°C strike temperature we were ready to mash in (the grain is kept inside the house and grain temp was 22°C). We usually empty 22 litres of 72°C into the mash tun as 3 litres sits below the tap level in the HLT/boiler. 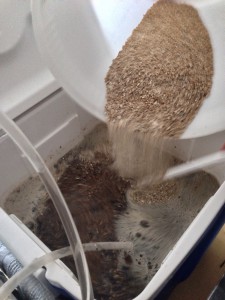 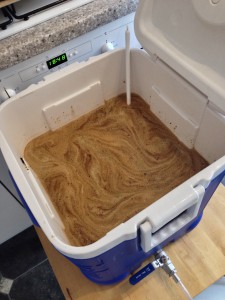 Once all the grain was carefully stirred in, we took the temperature (64°C) and shut the lid for an hour. In the meantime, the boiler was refilled with about 10 litres of water and heated to 75°C ready for the sparge. After an hour I did an iodine test to check to see if the starches in the grain had converted to sugar. Yellow/Amber means yes and Black/Purple means you need to leave the mash for a bit longer. Our mash was ready! So once I had performed the vorlauf (running off the wort and slowly pouring it back onto the top of the grain to enable the grain husks to create a filter) we were ready to SPARGE BABY …

Our Brupaks sparge arm does a lovely job of gently adding the sparge water onto the top of the grain bed to add the extra pressure needed to get the lovely wort out from the grain. Eventually it starts to dilute the wort, but as soon as we hit the 26 litre mark we are ready for the boil. 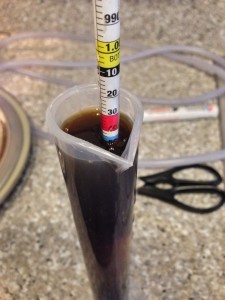 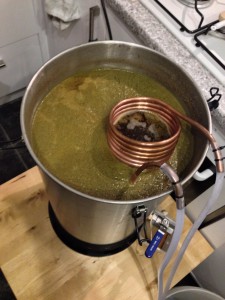 The pre-boil gravity reading was 1.057 (adjusted for temperature) and to be fair this was probably a little lower than we wanted. Obviously stopping the sparge would have resulted in a higher gravity, but less wort and there is always a trade off. I hope any seasoned home brewers reading this will give me some tips on how I can improve the efficiency of this part of the process.

The Turbo 500 was once again fired up and a rolling boil was reached in about 40 minutes (1800w element). The 10g of bittering Chinook pellets were added and it was left to boil for an hour. Ten minutes before the end of the boil we carefully sunk the coiled wort chiller in (to sanitise it in the boil) and then at “flame out” or “plug off” we added the 170g of Chinook pellet hops (see the lovely green pic above).

Once the chiller had done it’s work, chilled the wort and created clean hot washing up water, Mart took an Original Gravity reading of 1.055 and pitched the yeast into 23 litres of the beautiful sweet BLACK liquid. 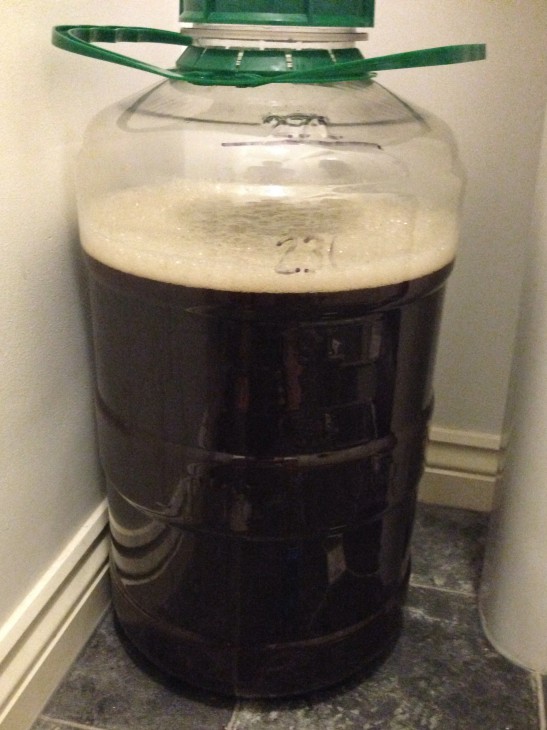 It sat in primary fermentation for 5 days and then Mart transferred it (off the trub) to secondary for about 10 days with the 200g of dry hop Centinnial going in 3 days before the end. We’re hoping to bottle it all in 330ml bottles as this will hopefully be something to share with appreciating friends and maybe even The Great British Home Brew Challenge 2014.

I’ll update this post with more news and a tasting as soon as it happens. Fingers crossed!

The Centinnial went into FV2 a few days ago and tonight we bottled the Black IPA. Mart racked the beer from FV2 into FV3 yesterday because we were concerned about the amount of dry hopping time and also wanted to try and reduce the amount of hop debris we would have to deal with. Tonight we registered the Final Gravity at 1.010 so this should put the beer at about 6% ABV. 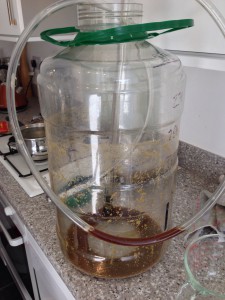 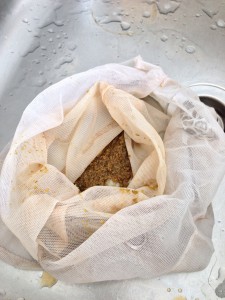 Another discussion on twitter and the use of this Priming Sugar Calculator meant that we mixed 113g of brewers sugar into boiling water and placed it in the bottom of a sanitised bottling bucket (with a Little Bottler tap attached). We used a sterilised nylon hop bag on the end of the auto syphon to try and catch even more of the hop resin. We don’t have a fermentation fridge for cold crashing so would be bottling as we normally do – at room temperature. This seemed to work quite well and the bottling bucket contained what looked like fairly hop free black liquid elixir – and it tasted hoptastic! 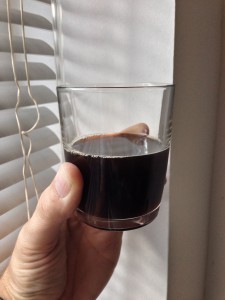 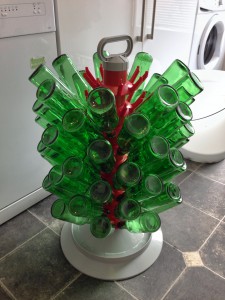 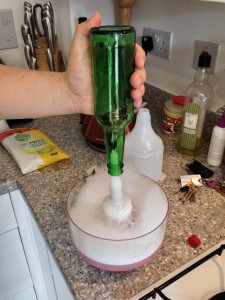 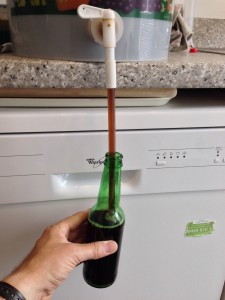 We pushed about 60 brand new GREEN 330ml bottles through the bottle rinser with StarSan no rinse sanitiser and added them to the bottle tree, then set up a two man production line – one filling and one capping. The Black IPA in the green bottle with a black crown cap does look pretty special. 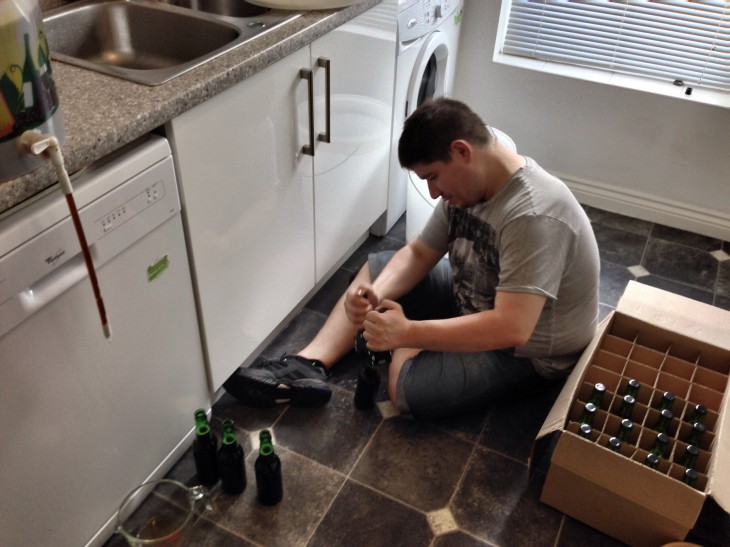 We rattled through 58 bottles before we got to the bottom of the bucket. Thoughts are now turning to a bench crown capper and we’re rapidly starting to realise that we are fighting a never ending homebrew equipment battle 🙂

We have a case of 29 each for bottle conditioning at our homes – out of sunlight (darn those green bottles). I just hope the priming sugar calculation is OK and we don’t end up with exploding bottles, gushers – or worse – flat IPA! Tasting notes to follow in a couple of weeks.

First pouring of our Pacific Black IPA 6% after only 11 days in the bottle #homebrew http://t.co/qIV7NpY0WI 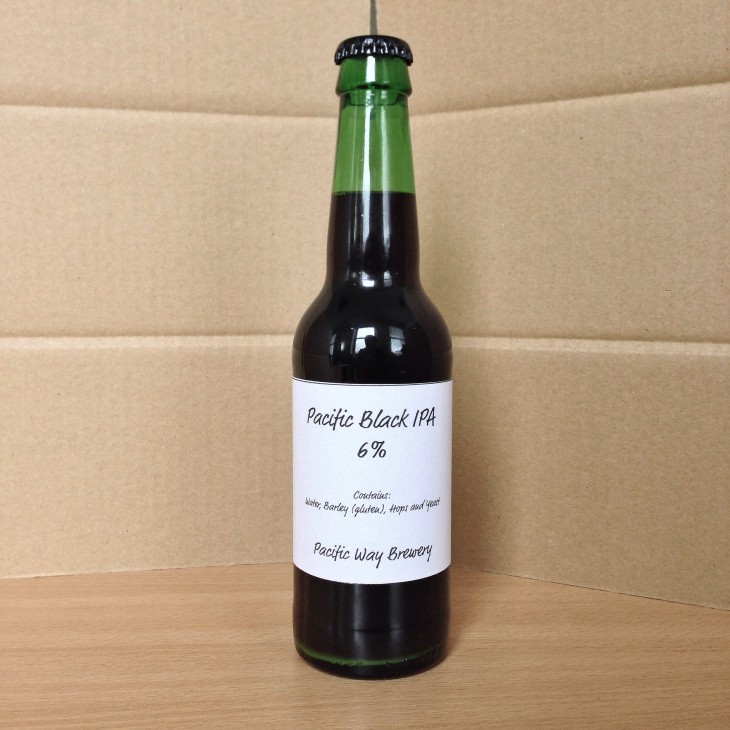 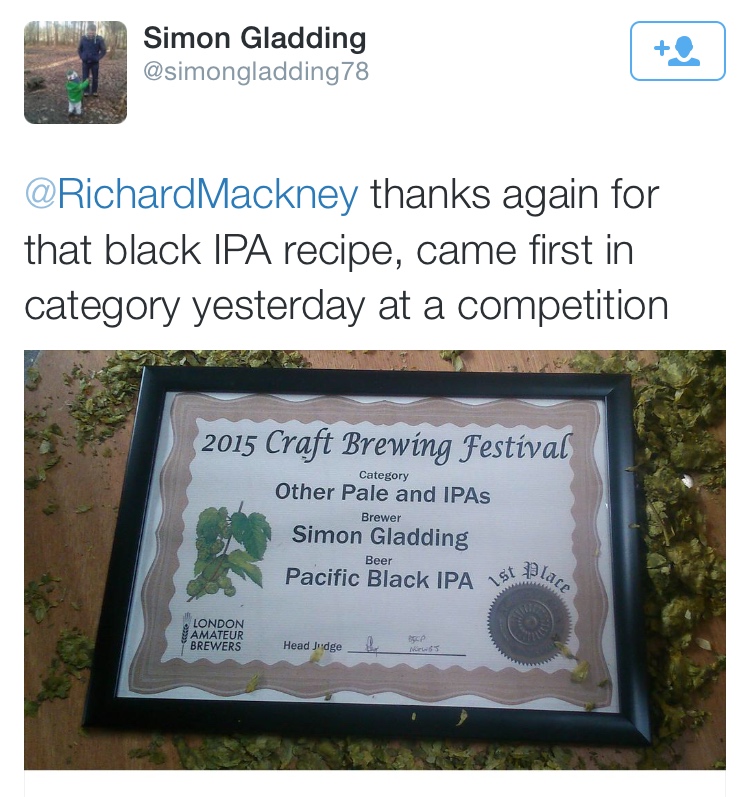 In February (2015) I had a brief chat with Simon Gladding on twitter who was using my Black IPA recipe to take to his Hertford Beer and Brewers Group and then yesterday he informed me (see below) that he had came first in category at The 2015 London and South East Craft Brewing Competition and Festival! well done Simon! I’m so pleased that another brewer has been able to take the base recipe and do really well with it.

Comments from the judges at the London & South East Craft Brewing competition:

“nicely balanced, lovely beer to drink” & “an excellent IPA with a good balance of ingredients”

@RichardMackney thanks again for that black IPA recipe, came first in category yesterday at a competition pic.twitter.com/VVUB9P537f

If you liked this post, you’ll probably love these:

This website uses cookies to improve your experience while you navigate through the website. Out of these, the cookies that are categorized as necessary are stored on your browser as they are essential for the working of basic functionalities of the website. We also use third-party cookies that help us analyze and understand how you use this website. These cookies will be stored in your browser only with your consent. You also have the option to opt-out of these cookies. But opting out of some of these cookies may affect your browsing experience.
Necessary Always Enabled

Any cookies that may not be particularly necessary for the website to function and is used specifically to collect user personal data via analytics, ads, other embedded contents are termed as non-necessary cookies. It is mandatory to procure user consent prior to running these cookies on your website.