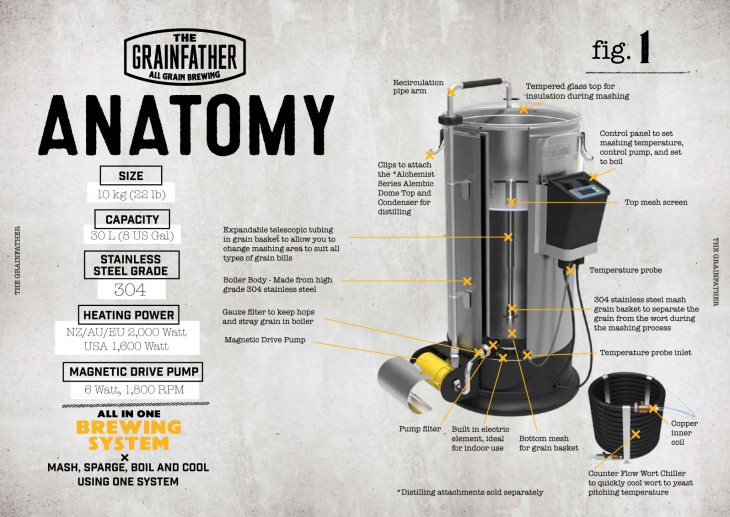 In July I noticed an all-in-one brewing system being tested for the UK market by James Kemp, I was curious as this product resembled the Still Spirits Turbo 500 boiler that Martin and I started all-grain brewing with a year ago. A quick search confirmed that Imake Ltd the parent company for Still Spirits based in New Zealand had launched a new product – taking the Turbo 500 as a base boiler and adding an internal metal basket, a pump, a temperature controller and a counterflow wort chiller The Grainfather had been born. Flicking back through my brewers notebook I confirmed that my own sketches of a Turbo 500 conversion had become a reality! So excited by this I emailed Imake to find out more information, and of course offered my services in testing The Grainfather 😉

Fast forward to October and I got an email from the founder of Imake to arrange for me to receive one of the first units in the UK. 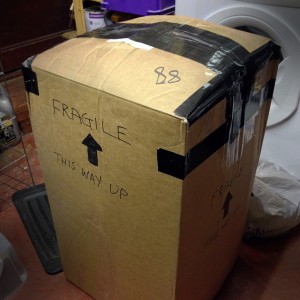 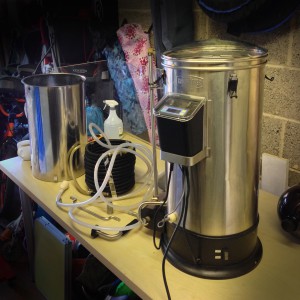 The Grainfather comes neatly in one box with the items stacked inside the main boiler – great for storage when not in use and when assembled it only requires a small footprint and one household 13A plug socket. You could easily use this on the floor of a small household kitchen. This unit was missing the instruction booklet, but luckily it’s available online from Lovebrewing – I’d suggest reading each step of the process as it does involve pressing the correct buttons in order to switch between the 2kW or 500W output. 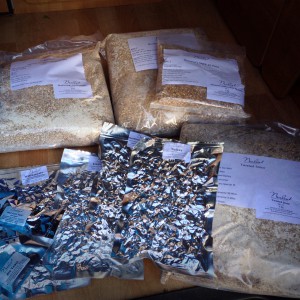 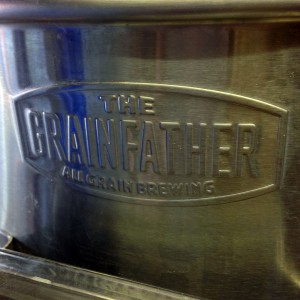 To make the process even simpler, Martin and I decided to buy a few all-grain recipe kits. This meant that we didn’t have to design a new recipe or buy a new bulk bag of crushed grain that had the potential of going out of date before we used it all. We also didn’t have to worry about weighing out the grain, it comes ready mixed in a bag ready to dump into the mash tun (along with hops and yeast for the later stages). The Grainfather website has recipes and Lovebrewing sell all grain kits in the UK. 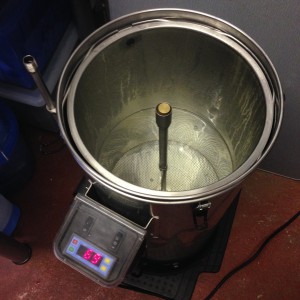 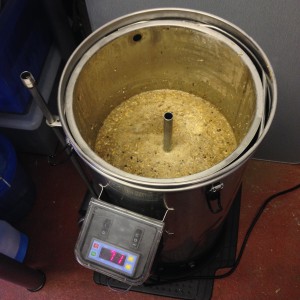 After a quick assembly and wash-down we added the mash water as per the instructions. It’s based on an equation (Grain weight in kg x 2.7) + 3.5 which for us meant 17.5litres of cold water from the outside tap! The Grainfather has a visible volume scale on the inside of the boiler so the water is added without the basket at this point. The Grainfather states that it can handle grain bills of up to 9kg.

Once the basket was put in place, we switched the temperature controller (STC) to 68ºC and turned the element on (2kW), locked down the glass lid and turned our attention to our second brew running on our more traditional three tier/three pot system. Once the water was at strike temperature (bearing in mind we had very cold grain) we slowly mashed in to the inner bucket taking care not to send any grain down the centre tube with the aid of a cap. Strike temperature isn’t as important as in our traditional Mash Tun as the STC will gently maintain your desired temp using the element set at 500W.

At this point the perforated top plate is added to sit gently over the mash and the recirculation pipe and lid is fitted. Recirculating the mash is new to me (in practice) and I was impressed with the flow of the wort taken from the bottom of the mash and distributed over the perforated plate. It wasn’t long before the mash temp had stabilised and clear wort was flowing with very little evidence of grain particles. 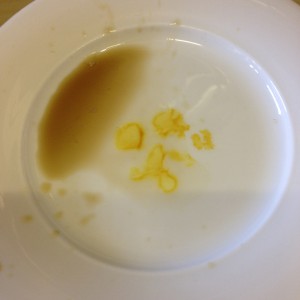 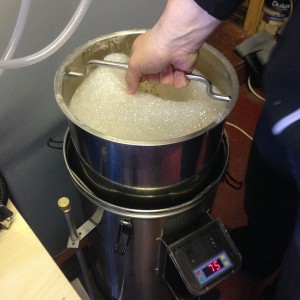 After a 80 minute mash I checked the wort with iodine – It showed that the starch had been converted and we were ready to mash out. Re-setting the STC to 75ºC we continued to recirculated for a further 10 minutes. It was then time to switch off the pump, remove the lid and recirculation pipe and attach the handle to the inner basket. Lifting the inner basket slowly to allow some of the wort to drain and then twisting the basket allows feet on the basket to sit on the top of the boiler. 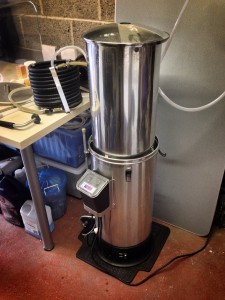 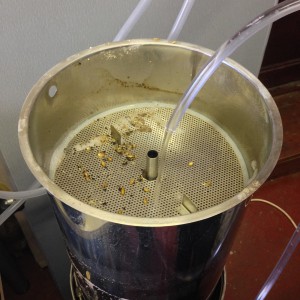 At this point of the process you need to know where your sparge water is coming from! by reading the instructions up-front a couple of options are suggested:

Both of these options require your sparge water to be higher than the top of the raised mash basket to allow for a gravity feed unless you have a pump. This is probably the only failing of the All-In-One system – however, I’m not sure how any design changes could allow for sparge water to be heated and distributed while a recirculation of mash was being processed. We had our Turbo 500 boiler and my homemade STC enclosure at hand to have the sparge water sitting at 75ºC in preparation.

The sparge water calculation is as follows (28 – mash water volume) + (grain bill kg x 0.8) which worked out at 14.6 litres for our recipe. In practice, we basically sparged until we could see the boiler hitting it’s 30ltr MAX mark which worked out to be the correct amount. It was fairly difficult to read the scale with the inner basket sitting over the boiler so I wondered if the vertical pump tube could double as a sight glass in future models? 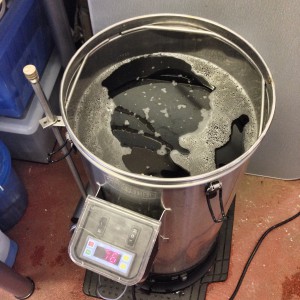 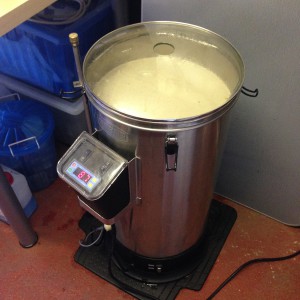 Once the boiler was full of sweet wort and we had taken the pre-boil gravity reading we removed the grain basket and set the boiler 2kw element. Althought the STC is reading the temperature, it’s not actually controlling the element for the boil. As with our experience of the Turbo 500 a beautiful steady rolling boil can be achieved and the only thing to really keep an eye on is catching the hot break. 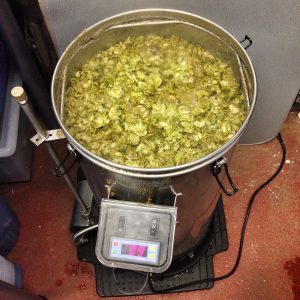 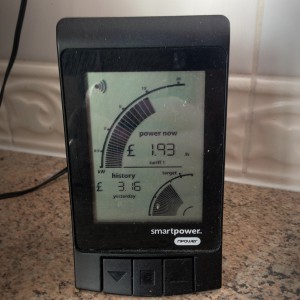 Here is a photo of 70g of Willamette going into the boil for 90 mins. The 2kW element should cost about 30 pence per hour to run (2014 UK average electricity cost) but as you can see in the photo above I was burning £1.93 an hour with two boilers on the go, a hot tub and the kitchen kettle for a cupa tea! (how many breweries have a hot tub for use while the boil is on? 😉 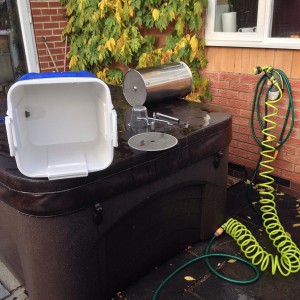 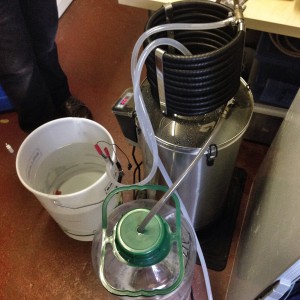 While the boil was on I started cleaning the two mash tuns. The Grainfather was easily lifted and emptied straight into the composter while the 45Ltr Igloo Cool Box usually needs a scoop-out. Both are easily washed outside with a hose and left to dry.

Once the boil time was complete and the 5 minute hop addition and Irish Moss had been added it was ready to cut the power to the element and start the cooling process. After connecting the counterflow wort chiller to the pump we recirculated the still boiling (or at least 95ºC) wort through the chiller to sterilise the pipes for another 5 minutes. Then we turned on the cold water from the outside tap to start the counterflow and once we felt the wort coming out to be cool we stopped the pump and moved the output pipe into a sterilised fermenter. Adjusting the counterflow lever to control the speed/heat of the wort we transferred 25Litres with ease and in very little time.

Cleaning The Grainfather is easy – remove as much hops as possible and then add the hot counterflow water from your bucket into the boiler and dilute the trub before tipping it down the drain. Add more hot water and cleaning solution to the boiler, re-connect the chiller and recirculate the solution to clean though the conterflow chiller and pump unit. Do the same with the recirculation arm before finally emptying the boiler of the solution and adding clean water to scrub and flush all of the parts again. In practice this is a really simple procedure and ensures you don’t leave any sticky wort inside the equipment. 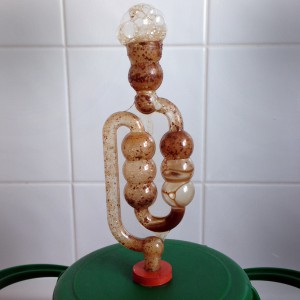 We took a starting gravity reading of 1.052 (adjusted) and our job was done. When the wort was fully down to temperature I re-hydrated the yeast and added it to the fermenter. The only problem I had was that The Grainfather had produced such a good quantity of wort that I didn’t leave enough head-space and the next day I found a vigorous fermentation flowing through the airlock 🙂 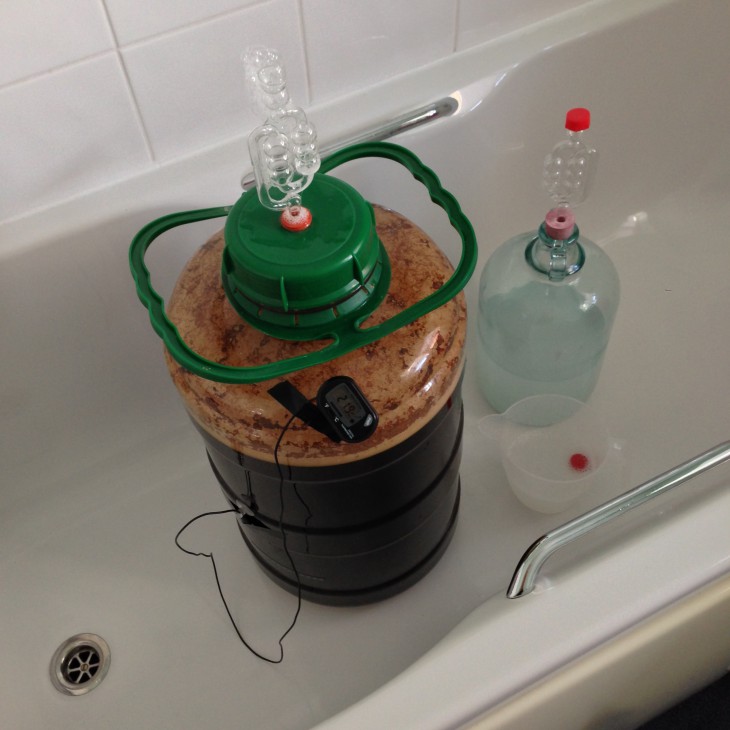 The end product was a beautiful hopped Stout (see it on Untapped) with a good white head. Being a stout it was difficult to see the clarity but I have no doubts about the mash recirculation system helping in this area. 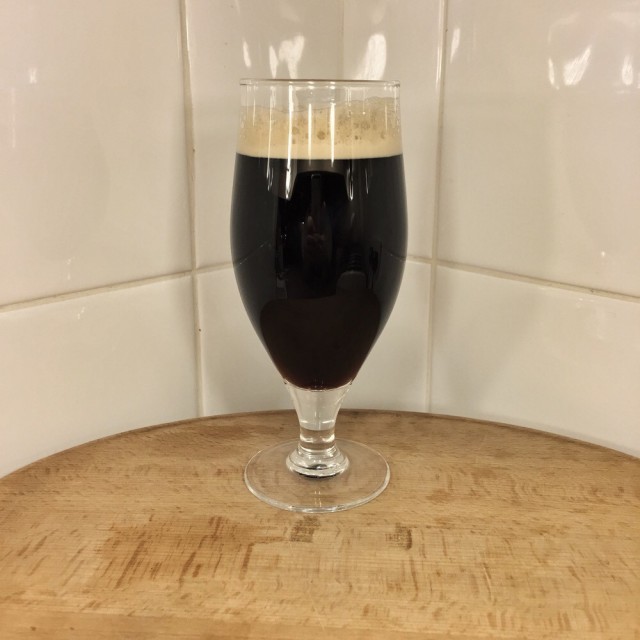 Oh, did I mention that you can buy a still attachment and turn your Grainfather produced beer into Whiskey! 😉 best be quick … 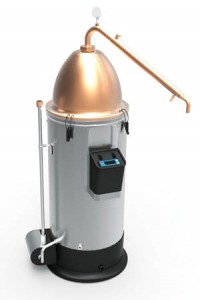 Testing the @Grainfather a blog post about our fun #homebrew brewday 🙂 http://t.co/J50JzJ8J2w